The irony isn't lost on me that Marisa de los Santos' new book, Falling Together, centers around three once-inseparable college friends who come back into each other's lives several years later, because the return of Marisa de los Santos with a new novel felt a little like a reunion to me. Like her earlier novels, Love Walked In and Belong to Me, there's so much more to this book than meets the eye, and as I tore my way through it, I felt many of the same emotions her characters did.

Pen (short for Penelope), Will, and Cat met in college. "Met cute," they liked to say, when Will and Pen came to Cat's aid when she was in the middle of an epileptic seizure in a university bathroom. Pen was the idealist, Cat the flighty one, Will the steadfast one. The three were inseparable for a number of years (often at the expense of romantic relationships any tried to pursue), until one day, Cat decided to get married and determined that in order to have any chance at a successful marriage, she needed to end her friendship with Pen and Will. Shortly thereafter, Will left Pen, because he said he didn't know how to be friends with just her. Will and Pen both got on with their lives, until one day just before their 10-year college reunion, both received an email from Cat saying she needed help and begged them to come to the reunion. The email sent their lives into disarray, and is the catalyst for an interesting, sometimes frustrating and heartbreaking, journey.

Some have referred to de los Santos' novels as "chick lit," because they're books about relationships and love, but I believe that doing so denigrates the quality of her writing and her storytelling ability. Her use of language is almost poetic and she develops characters that seem fairly simple on the surface but are truly complex, flawed, unique people. While some of the directions the story takes are a little overly dramatic, the book pulls you in emotionally and makes you want to get invested in the story. I thought this book was fantastic, and you can't go wrong with either of her other books. Take the chance—you won't regret it.
Posted by Larry at 7:45 PM No comments:

Book Review: "The Sense of an Ending" by Julian Barnes

Brilliant. That's one of the best words I can find to describe Julian Barnes' latest book, The Sense of an Ending, for which he recently was awarded the Man Booker Prize. This is a book that is fairly straightforward, yet its impact sneaks up on you.

When we first meet Tony Webster he is a high school student; he and his friends want nothing more than to be thought of as smart, witty, and successful with the opposite sex. Into their clique comes Adrian Finn, a new student who actually is smart and witty, and while Tony and his friends envy Adrian a bit, they all vow to remain friends even as they go their separate ways. Their lives proceed in this regard until Adrian's life takes a tragic turn. But many years later, when Tony becomes aware of information regarding this tragedy, and his role in it, he begins to look back at his past while trying to figure out how to make sense of this sudden discovery.

The Sense of an Ending is a book about memory—how it aids and how it fails us, and how our memories of events in our past are shaped by what we want to believe. Reading this book I discovered, much as Tony did, that nothing is quite what it seemed, and acceptance that you cannot change past actions is often hard to come by. Julian Barnes let the story unfold little by little, and it isn't until the end of the book that I was able to put all of the pieces together. This is a very short book but it packs a powerful punch, and it conveys the realities we learn as we age and as we analyze the directions our lives have taken. This is a beautifully written book and easily one of the best I've read this year.
Posted by Larry at 4:47 PM No comments:

At age 75, James Lee Burke may be one of our greatest living crime writers, if not simply one of the best writers around. He's won two Edgar Awards, been nominated for a Pulitzer Prize, and created some fantastically vivid characters in his more than 30 books. If you haven't read anything he has written, pick up one of his books. You won't be sorry.

Burke usually writes a novel a year, and lately switches between his longtime protagonist, Louisiana police detective Dave Robichaux, and Texas sheriff Hackberry Holland. Feast Day of Fools follows Hack Holland as he tries to keep the peace in his Southwest Texas border town, and resists the temptation to begin a relationship with his much-younger deputy sheriff, Pam Tibbs. And then one day, the erstwhile alcoholic ex-boxer Danny Boy Lorca reports that he witnessed a man being tortured and killed in the desert. Holland's investigation leads him to the home of Anton Ling, a charismatic Asian woman known for helping illegal aliens cross over the Mexican border, whose past is more sinister than she is willing to let on. As Hack struggles with his attraction to both Anton and Pam, he finds himself drawn into an ever-more sinister web, complete with Russian gangsters, the son of a former nemesis, an unstable preacher, and the return of serial killer Jack Collins, presumed dead at the end of the last book to feature Hack, Rain Gods. Along the way, there's loads of violence, soul searching, intrigue, and Burke's fantastic writing.

One of the things I love about Burke's writing is his evocative imagery, and it is once again in full force. His heroes are truly flawed characters, wanting to do the right thing but not always approaching it the right way, committed to truth and justice, but cutting corners where necessary. There were a lot of characters to follow in this book, and many were fully developed and more complex than you'd expect them to be. My only criticism of the book is that it was almost too full—I could have done with one less villain or plot thread to follow, although Burke resolved the story quite well. Feast Day of Fools had almost an elegiac feel to it, and I couldn't help wondering if Burke sees a little bit of himself in the aging Sheriff Holland. All in all, this is a hefty, action-packed and beautifully written book, earning its place along James Lee Burke's other must-reads.
Posted by Larry at 2:16 PM 1 comment: 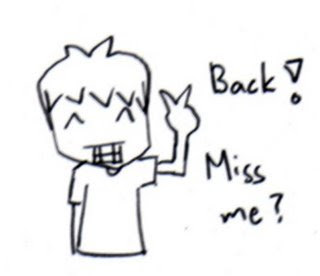 Yeah, I know. It has been a little more than two weeks since I last blogged.

I've spent the last 4-5 weeks working nearly nonstop in preparation for my association's annual conference, which ended this past Tuesday. I was keeping such crazy hours I literally got up, went to work, came home, worked, ate dinner, worked, and fell asleep (sometimes at my desk). Didn't work out, didn't blog, didn't read...but fortunately, it's over now.

You probably might not have noticed I was gone, but I'm back. Hopefully you are, too!
Posted by Larry at 1:56 PM 1 comment:

In Memory of a Visionary... 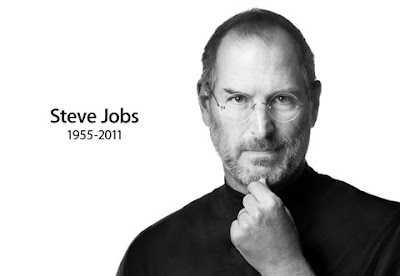 The world lost a creative genius, a dreamer, an innovator who knew no bounds, and a visionary last night with the passing of Apple founder Steve Jobs. Jobs, who had been suffering from cancer since 2004, stepped down from his role at Apple in August.

In a statement, the company said, "We are deeply saddened to announce that Steve Jobs passed away today. Steve’s brilliance, passion and energy were the source of countless innovations that enrich and improve all of our lives. The world is immeasurably better because of Steve. His greatest love was for his wife, Laurene, and his family. Our hearts go out to them and to all who were touched by his extraordinary gifts."

Moments after the news was announced, I was amazed by the number of Facebook posts from friends all over the world remarking on Jobs' death. Then I realized the irony—so many of us were communicating using technology envisioned by Jobs himself.

This irony wasn't lost on President Obama, who said after learning of Jobs' passing, "The world has lost a visionary. And there may be no greater tribute to Steve's success than the fact that much of the world learned of his passing on a device he invented."

Jobs' life is a true testament to seizing your dreams and never letting anything stand in the way of achieving them. His 2005 commencement address at Stanford University, in which he discussed "How to Live before You Die," should be required viewing for all.

Rest in peace, Steve. And thank you for leaving an indelible imprint of creativity, courage, and connectivity on our world.