Caution: Offended Driver Behind You 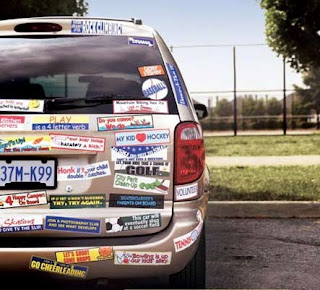 People have put bumper stickers on their cars for years. But more and more, instead of the "My Child is an Honor Student at Joe Schmo Middle School" or "Visualize World Peace," I've been seeing people take their political and social beliefs to their bumpers.

Of course, ardent politicos have always shown their support for their favorite local, state and national candidates. But over the last 10 years, with the country's divisions ever more sharply delineated and anger becoming the prevalent emotion, the goofy bumper stickers are being replaced by the critical, and instead of visualizing whirled peas, people are visualizing a world without abortion or same-sex marriage.

If you've ever read this blog or talked to me, you know I'm pretty liberal, particularly when it comes to social issues. While I believe everyone has a right to express their opinions, I don't know that I need to see their opinions when I'm stuck behind them in traffic for an hour. And as wrong as it may be, I'll admit my courtesy toward my fellow drivers lessens when faced with someone with a "Marriage is between a Man and a Woman" or a "Proposition 8 across the USA" bumper sticker. I'm sure some of those drivers are wonderful people, but I don't understand the need to trumpet your hatred in such a public way.

Again, I support everyone's right to believe what they want to. That's what makes this country as great as it still is.

But to the person driving around with the "It's Adam and Eve, not Adam and Steve" bumper sticker, I'm not letting you merge in front of me.

Perhaps my bumper sticker should read "I Only Brake for People Who Hate in the Privacy of Their Own Homes"? Just a thought...
Posted by Larry at 3:19 PM 1 comment:

It's 1981 in Houston, Texas. The country is in the throes of the oil crisis. Struggling lawyer Jay Porter and his pregnant wife are taking a nighttime boat ride in celebration of her birthday when Jay rescues a woman from drowning. She appears to have been assaulted, so he drops her off at the police station. And then Jay's troubles start, when after several days he learns a man was murdered that night and the prime suspect is the woman he rescued.

Of course, that's just the tip of the iceberg. Jay is more than just another struggling lawyer—as a college student he was actively involved in student civil rights issues, which led to his being watched to the FBI and, ultimately, his arrest and a trial. That experience continues to haunt him and make him suspicious of those around him, and as he finds himself torn between wanting to figure out exactly what happened with the woman that night and wanting to protect himself, his family and his career, he finds the old suspicions and fears returning once again.

This book has some political intrigue, corporate bad guys, race relations, labor issues and some interesting plot development, but I still wished I liked the whole thing a bit more. I felt that Attica Locke (cool name for an author) spent a lot of time setting up the story and then didn't do enough to keep the story moving beyond what you'd expect to happen. I liked the main character, and some of the action is enjoyable, but I felt the book got a bit mired in civil rights history from time to time. Still, this was an interesting read.
Posted by Larry at 12:00 PM No comments:

Richard Rossi is at a crossroads in his life. He's pushing 50, but he's in the best shape of his life; he's in a long-term relationship, but they've never been particularly focused on monogamy; he (sort of) enjoys his HR job at a software company, but a few major crises have sprung up; and one of his oldest friends has a health crisis but wants Richard to share the news with his wife. And then Richard discovers that his partner may be more serious about a fling he's in the midst of, just at the same time Richard is struggling with his feelings about Ben, a married man that he has been seeing.

How Richard chooses to deal with all of the chaos in his life is at the crux of Insignificant Others. The only way Richard has ever been able to handle anxiety and stress is through exercise, but even that doesn't seem to provide the relief he needs. For the first time in his life he is being forced to take control and make tough decisions, and he isn't too sure he wants to.

I've been a big Stephen McCauley fan for years, but I'll admit this book isn't one of his best. Richard's indecisiveness and willingess to let everything unfold around him got frustrating after a while. As one character said to him, "if you never say what you want, if you never figure out what you want, you never have to worry about being disappointed in not getting it." I didn't feel as if any of the characters were particularly likeable, and while I was interested to see how the story unfolded, I found the ending to be the most intriguing piece of the book. I'm a little disappointed, since McCauley usually takes a few years between books. I'd definitely recommend you read Object of My Affection (much, much better than the Jennifer Aniston movie) or any of his other books instead of this one.
Posted by Larry at 5:44 PM No comments:

One Sunday afternoon in the fall, Josh Kilmer-Purcell and his longtime partner, Brent Ridge, were headed back to their NYC apartment after a weekend of apple picking in upstate New York, when they stumbled upon the little town of Sharon Springs. It was there they found their dream home, the 19th-century Beekman Mansion, which came complete with a 60-acre farm. After investing most of their savings, they had to face the challenge of balancing their busy careers during the week (Josh was an ad exec and Brent was a VP for Martha Stewart Living) and handling farm-related duties on the weekends. But they dreamt of finding a way to quit their day jobs and have the farm sustain itself.

The Bucolic Plague is a humorous account of Josh and Brent's struggles to make a 60-acre farm thrive, but it is also the story of how to make a relationship endure a life-changing event when you're two completely different people. Sure, there's definitely some fish-out-of-water-type humor about two non-outdoorsy guys making a go at farming, but at its heart, this is a book about trying to follow your dreams even as everything is going wrong around you. And this book is the basis for a new television series, The Fabulous Beekman Boys, which starts June 16 on the Planet Green network.

I am a big fan of Josh Kilmer-Purcell's writing. His memoir, I Am Not Myself These Days, an account of his days as an ad exec by day, alcoholic drug queen named Aqua at night, remains one of my favorite books. I found this book funny, poignant and tremendously enjoyable, and I have absolutely no desire to ever live on a farm. Give it a shot.
Posted by Larry at 2:52 PM No comments:

True confession time: I am a total sap. (As if you didn't know.) Seriously. I get misty-eyed at the drop of a hat, whether it's watching a golfer win their first professional tournament, hearing a song that reminds me of something poignant in my life, or even that Folger's commercial when the brother comes home from Africa unexpectedly, just in time for Christmas. So let's just say that Michael Zadoorian's fantastic book, The Leisure Seeker, had me at hello, and reduced me to tears by the end.

John and Ella Robina have been married for a long time. They have two grown children and several grandchildren, and both are dealing with serious health problems in the twilight of their lives. Ella has terminal cancer and John is in the early to middle stages of Alzheimer's. Knowing that the end of their lives—or at least life as they know it—is imminent, Ella decides they should go on one last vacation, a trip in their Leisure Seeker trailer, from their Detroit home to Disneyland. Needless to say, neither their doctors nor their children support this decision, and once they leave, both children threaten to send the police after them to bring them home.

Their trip across the country is at times nostalgic (they travel along Route 66) and difficult, as Ella's pain is increasing, as are John's periods of dementia. And while Ella realizes this trip may be the last time they're on their own, it doesn't stop her from being incredibly frustrated with John's "spells" or her children's reaction to their trip. A number of times on their trip Ella and John watch old slides of past family vacations in the Leisure Seeker, which serve as an emotional counterbalance to their current state.

Zadoorian does an amazing job telling the story from Ella's viewpoint. He truly has captured the spirit and soul of a woman nearing the end of her life, torn between love and devotion to her husband and frustration with the decline of his memory. While you have a feeling how the book might end, the story is rarely, if ever, predictable. The ending is difficult (and that's not giving anything away) but I walked away privileged to have spent time with the Robinas. Truly a wonderful book.
Posted by Larry at 2:47 PM No comments: