To the Spoils Go the Victories...

Earlier this week, the Associated Press named Serena Williams Female Athlete of the Year. She won both the Australian Open and Wimbledon in 2009, and her dominating play throughout the season ensured she ended the year as the WTA's top-ranked player. 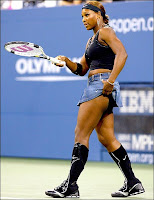 While Williams' prowess on the court is undeniable, there's the little matter of a little temper tantrum she threw during the US Open in September. A temper tantrum during which she threatened to shove a tennis ball down a line judge's throat after an incorrect foot fault call, and followed it up with brandishing her racquet at the far-smaller line judge. A temper tantrum for which she was disqualified from her semi-final match and fined more than $80,000.

Not to be outdone, during this same week, the Philadelphia Eagles named Michael Vick the recipient of the Ed Block Courage Award, which recognizes a player from each NFL team who, in the eyes of his teammates, exemplifies a commitment to sportsmanship and courage. 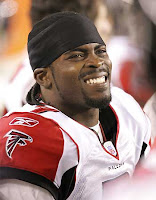 Now, Vick has acted in a professional manner (read: he has kept his mouth shut and stayed out of trouble) since joining the Eagles after he was released from jail for dogfighting. But can he be considered courageous for overcoming a situation he created for himself? Should he receive an award just for keeping his nose clean?

Like it or not, professional athletes are role models, and sadly, very few act worthy of this responsibility yet are paid overwhelmingly large salaries and receive profitable endorsement deals. While athletes seem to be able to follow their own code of conduct, should they be recognized as shining examples when their behavior proves them otherwise?

Should Williams receive an award for her on-court performance when it was her performance on the court that showed her sportmanship seriously lacking? Should Vick be voted as an epitome of courage alongside players from other teams who overcame paralysis or donated large amounts of time to volunteer service?

My answer in both cases? No. As more children dream of emulating professional athletes, shouldn't we hold those who actually deserve to be emulated up in the spotlight?
Posted by Larry at 6:59 PM