Delusion Will Get Us Nowhere...

Can we just pull the Band-Aid off the country now instead of waiting until the midterm elections, and having to hear, day after day, how angry everyone is with President Obama and the Congress? Polls talk about how 2 in 10 Americans feel the country is going in the wrong direction, and that Democrats aren't energized to go to the polls in November. Well, since every news item says how badly the Democrats are going to lose, that doesn't exactly motivate, now does it?

Truth be told, I'm angry, too. I'm angry at a president who promised to do things differently but seems to have fallen in the same traps his predecessors have. I'm angry that once again, it's easier to focus on preventing equality and hypocritically hypothesizing about the evils of homosexuality and same-sex marriage and gays in the military than doing what's right. I'm angry that people like Sarah Palin can get away with claiming that the recently-enacted health care reform empowers death panels, when every reasonably intelligent person knows that's false, but no one will call her out on her misinformation. And most of all, I'm angry that an administration that actually has accomplished more than any other in history is one of the most reviled.

But with all of that anger, I am not delusional. I have not forgotten that although President Obama pledged to change the direction in which our country is going and hasn't made as much progress as people thought, he did not put us in this horrible rut. Two years is not enough time to undo the damage of the previous eight. I know enough that putting the Republicans in charge again and allowing them to undo all of the good that has been done, and revert back to where we were in 2008, simply enhances the disaster. After all, this is a party that has fought everything the President and his administration have done and tried to do since January 2009. 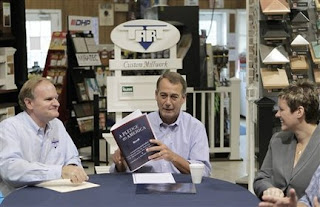 The other delusion that I find immensely disturbing is the notion that by voting out all of the incumbents in favor of political neophytes, everything will change for the better. The truth is, the system is broken. Until the political system gets fixed to truly be representative of the people, until someone cannot come in and buy an election by using their own money to outspend their rivals, it doesn't matter who's in office; the same things will happen.

I'll admit, I'm at the most cynical that I have been in some time about our country's future. I keep hoping that suddenly voters will realize that new doesn't mean better, that the Democrats won't roll over after having only a few years of opportunity. But then I'd be delusional, wouldn't I?
Posted by Larry at 4:21 PM