Celebrating one year of demolished barriers... 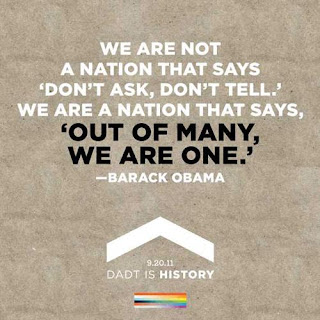 Today marks the one-year anniversary of the end of Don't Ask Don't Tell. It's hard to believe that a full year has passed since the barriers that disallowed openly gay and lesbian soldiers from serving their country were demolished, but it is a pretty fantastic milestone to mark.

To the surprise of very few, the Pentagon has found that the end of DADT didn't have any negative effects on our military; in fact, the openness has even promoted greater trust and camaraderie among soldiers.

Yet that hasn't stopped some conservative Republicans in Congress from trying to do everything they can to bring back the days of discrimination and inequity. During the Value Voters Summit last week, Rep. Jim Jordan (R-OH), chair of the House Study Committee, said in an interview that he wants to reinstate the policy if the Republicans get control of both houses of Congress in November. He left open the possibility that those service-members who have already come out of the closet, like Brig. General Tammy Smith, would be discharged from the military if DADT is reinstated.

Many thanks to all those from both parties who championed openness and equality in our armed forces, and thanks to President Obama for having the courage to sign the ban into law. This is a remarkable anniversary to celebrate.
Posted by Larry at 8:32 AM