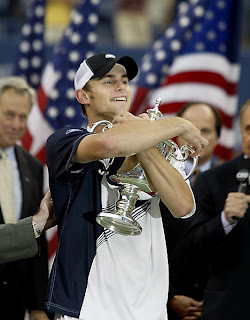 Andy Roddick's announcement—on his 30th birthday—that he planned to retire at the end of this year's U.S. Open might have been surprising only because of its timing. Despite a career in which he won 32 titles, including the 2003 U.S. Open, and holding the world #1 ranking, Roddick had struggled in the last several years, and his ranking plummeted to #22.

This afternoon, after losing in four sets to 2009 U.S. Open champion Juan Martin del Potro, an emotional Roddick called it a career. "For the first time in my career, I’m not sure what to say," he told the crowd. "My gosh. Where do I start? Since I was a kid I’ve been coming to this tournament and I felt lucky just to sit where all of you are sitting today, to watch this game, to see the champions that have come and gone. I’ve loved every minute of it."

While Roddick's career was marked as much by his successes as some stunning disappointments, including a devastating five-set loss to Roger Federer in the 2009 Wimbledon final (he lost 16-14 in the fifth set), and sometimes he failed to achieve more than expectations demanded, he is still to be commended for carrying himself as a true champion and serving as a role model for young American tennis players. And it's hard not to forget the brash, spiky-haired, visor-wearing 18-year-old who took the tennis world by storm. 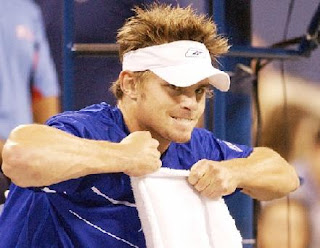 Beyond his achievements on the courts, Roddick has followed the model of fellow champion Andre Agassi in his immense generosity. In 2004 he won the Arthur Ashe Humanitarian Award for his charitable efforts, and founded the Andy Roddick Foundation, which has as its goal to improve the quality of life and enhance educational and economic opportunities for all children based on the principles of respect for family, education, and morality. To date. the Foundation has raised over $10 million.

While the tennis world will miss seeing Roddick on the courts (and some may particularly miss the shirtless practices, but it is what it is), there is little doubt he won't be gone for long. With his quick wit and disarming personality, it wouldn't be surprising to hear him doing commentary on matches sometime soon. And certainly, for a person with a heart and a giving spirit as big as his, the world will continue to benefit from his contributions.

Thank you, Andy, for an excellent career, for demonstrating how exhilarating the ups can be and showing how you can still achieve despite the downs. And thank you for being a role model on and off the courts. Well played.
Posted by Larry at 7:47 PM