One of the best reasons celebrities should make headlines...

Our society, and particularly the media, are so celebrity-obsessed, and as we all know, there are far too many celebrities out there famous for not doing anything, yet the media salivates over their every word, their every step, their every outfit. But when celebrities do something selfless, something for which they truly should get media coverage and appreciation, it's often not as sexy. 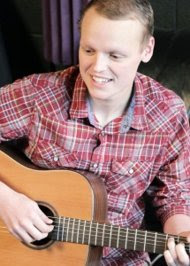 This is 17-year-old Zach Sobiech. Zach is terminally ill, fighting osteosarcoma—a rare form of bone cancer that is particularly aggressive and deadly. He was diagnosed with the disease in 2009, when he was just 14 years old. He's since endured a number of treatments, including a hip replacement. Last May, doctors discovered that the cancer had spread, and pronounced there is nothing more than can be done.

Faced with the question, "When faced with months to live, how do you say goodbye?", Zach wrote and recorded a song, Clouds, which became a viral hit. The song includes lyrics such as, as "Be ready to live and it'll be ripped right out of my hands," "If only I had a little bit more time with you," and the chorus "we'll go up, up, up/But I'll fly a little higher/We'll go up in the clouds because the view is a little nicer."

You can download Zach's song here, from iTunes, or you can make a donation to the Children's Cancer Research Fund directly.

God bless Zach Sobiech, and all those who pitched in to honor him. It's nice when people, especially celebrities, surprise you.