Cool cover song of the week... 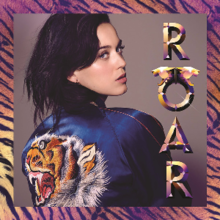 One of the songs you can't escape on pop radio these days is Katy Perry's Roar. It's certainly catchy, and it became Perry's eighth non-consecutive #1 song on the U.S. Billboard Hot 100. It also peaked at #1 on various charts, including Australia, Canada, Ireland, Scotland, New Zealand, and the United Kingdom, and reached the top five on most international charts, including France, Germany, Italy, and Switzerland.

Oscar Isaac is a singer and actor, who performed one of my favorite songs of 2012, Never Had, in one of my favorite movies of last year, 10 Years. He's about to become a huge star, as he's the lead in the Coen Brothers' newest movie, Inside Llewyn Davis, which is about a folk singer struggling to make it in the world.

The other night on Late Night with Jimmy Fallon, Oscar proved he could turn almost anything into a folk song, with a (sadly) very quick version of Roar. (Which boasted some impressive harmonies from Fallon himself.) I really hope Oscar hits it big, as he's exceptionally talented (and not bad to look at either).

Check out my previous Cool Cover Songs of the Week:

Borderline by The Counting Crows

How Deep Is Your Love by The Bird and The Bee

Life in a Northern Town by Sugarland, Little Big Town, and Jake Owen

I Don't Want to Talk About It by The Indigo Girls

Only You by Joshua Radin

What a Fool Believes by Neri Per Caso

Back to Black by Ronnie Spector

I Will Survive by Cake

The First Time Ever I Saw Your Face by The Stereophonics

Rolling in the Deep by John Legend

Go Your Own Way by Lissie

Winner Takes it All by McFly

What a Wonderful World by Joey Ramone

I Walk the Line by Live

Dear Prudence by Siouxsie and The Banshees

Who Wants to Live Forever by Breaking Benjamin

Love Me Tender by Chris Isaak and Brandi Carlile

All You Need is Love by The Flaming Lips

I Love It by Robin Thicke

Billie Jean by The Civil Wars

Across the Universe by The Scorpions

Can't Hold Us by Pentatonix

Jolene by The White Stripes

Shake Your Body (Down to the Ground) by Justin Timberlake

More Than This by Norah Jones

Ain't No Sunshine by Silent Rider

Stairway to Heaven by Heart

Nothing Compares 2 U by Capital Cities