Not All Are Tickled Pink by J.Crew...

When I was growing up, gender roles and behaviors were pretty clearly delineated for children. I played with die-cast cars and toy soldiers, traded baseball cards and was expected to play (or attempt to play) sports. It was just what was expected for boys in the early 1970s.

Of course, those behaviors and interests didn't quite fit with what I enjoyed. The thought of having to be the last kid picked for kickball or another sport, or massacred in dodgeball was utterly unappealing. I would have much rather (and did) hung out on the playground, mastering chinese jumprope or one of the variations of hopscotch called Colors.

While the gender expectations for children have remained somewhat the same over the years, many parents who grew up in the '60s, '70s and even the '80s have allowed their children to be the individuals they want to be. But there is still no shortage of "traditionalist" parents who believe boys play sports and girls play with dolls, and there is no blurring of those lines. 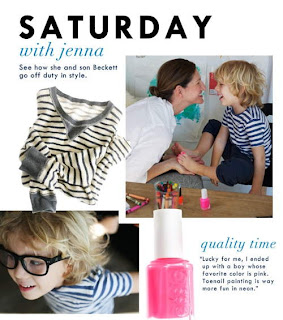 J. Crew waded straight into this battleground with their recent advertisement, which featured company president and creative director Jenna Lyons painting the toenails of her son Beckett. The caption says, "Lucky for me I ended up with a boy whose favorite color is pink. Toenail painting is way more fun in neon."

"Not only is Beckett likely to change his favorite color as early as tomorrow, Jenna's indulgence (or encouragement) could make life hard for the boy in the future," Brown wrote. J. Crew, known for its tasteful and modest clothing, apparently does not mind exploiting Beckett behind the facade of liberal, transgendered identity politics."

While some may question whether J. Crew ran the ad because it anticipated this type of controversy and welcomed the shot of publicity it would give the company, the debate it has generated is utterly ridiculous. Most research on gender identity and sexual orientation concludes that neither is a choice. Nor can they be shaped by a parent's wishes, said Dr. Jack Drescher, a New York City psychiatrist.

"I can say with 100 percent certainty that a mother painting her children's toe nails pink does not cause transgenderism or homosexuality or anything else that people who are social conservatives would worry about," he said.

And if Beckett turns out to be gay or transgendered later in life, who cares?

Jon Stewart should have the last word. He eviscerated media reaction to this ad with a segment he called "Toemageddon: This Little Piggy Went to Hell." At one point he says, "Taking your child to a face painting booth doesn't make them cats. Or cat lovers. Or Rum-Tum-Tugger."