I saw this on Entertainment Weekly:

Reports started surfacing all over the interwebs yesterday that the Today show was working to relieve Ann Curry of her co-hosting duties, a role she assumed a year ago upon Meredith Vieira's departure. Despite the fact that the show's newsworthy content has diminished significantly in favor of fluff, celebrities pushing their latest projects, and entirely too much Al Roker, Curry is being blamed for the show's declining ratings. (While the show is still the number one morning program, Good Morning America beat it in the ratings race a few times earlier this year, and continues to gain ground.)

With Matt Lauer signing a new long-term contract, Curry, whom many think lacks warmth, is on her way out. The New York Times reports that talks to replace Curry have been occurring in secret for weeks, while producers find a new assignment for her. She has held several positions on Today for 14 years, most notably as its longtime news anchor.

But regardless of what is transpiring behind the scenes (although in quite a public fashion), I don't imagine producers intended to be this direct, as the caption under Curry's face read, "Here Today, Gone Tomorrow." (The phrase was in reference to Steve Carell's new movie, Seeking a Friend for the End of the World, but I don't think anyone realized it.) 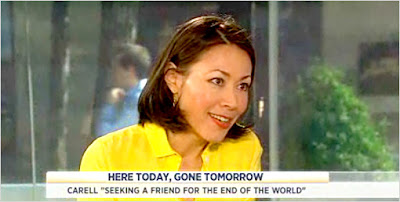 It will be interesting to see if anyone on the production team joins Curry on the way out after that gaffe...
Posted by Larry at 6:40 PM