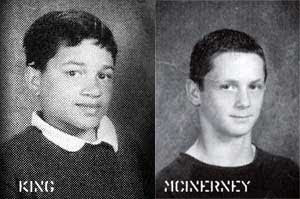 Time to get back on the soapbox.

In February 2008, 14-year-old Brandon McInerney killed his classmate, Lawrence King, because King, who was gay, allegedly teased McInerney repeatedly with sexual advances, and wore makeup and women's accessories to school. Three years later, McInerney was tried in a California court as an adult. While the prosecution alleged that this was a premeditated murder, as King had expressed his fears that McInerney might act violently toward him, the defense used the pathetic "gay panic" defense, saying that McInerney was "provoked" by King's repeated sexual advances.

And yesterday, the judge declared a mistrial. The jury voted 7-5 in favor of finding McInerney guilty of voluntary manslaughter, not first- or second-degree murder, which meant that seven jurors sided with the defense's version of events: that King's death was his own fault because he acted and dressed effeminately, and made sexual overtures toward McInerney.

While I'm not surprised by this result (except that the trial ended in a mistrial instead of an acquittal), I'm disgusted all the same.

Being gay is not an excuse for murder. It doesn't matter if Lawrence King wore makeup or called Brandon McInerney "baby." While those actions were misguided, they didn't justify McInerney's shooting King point-blank in the head.

Where does this second-class treatment stop? On an almost daily basis, gay people are verbally harassed and physically abused—sometimes seriously or even fatally—while they are walking on the street. Gay business owners or homeowners have had their property vandalized, even destroyed.

And rarely do the perpetrators pay the price. Judges, even when presented with overwhelming evidence supporting that anti-gay violence should be considered a hate crime, refuse to consider it as a possibility, nearly universally. And juries just don't seem to think that gay people are entitled to the same protections under the law that straight people are, as the majority of anti-gay violence cases end in the defendants being acquitted, or at least in mistrials.

Prosecutors will now have to decide whether to retry McInerney, although I'd be surprised if they do. It's sad to think that the legal system, built on guilt or innocence being determined by a jury of our peers, fails to protect gay people time and time again.

With peers like this, who needs enemies?
Posted by Larry at 5:13 AM