Using their power for such good...

I haven't watched The Amazing Race in a number of seasons, although when I heard that the team of Josh Kilmer-Purcell (who wrote one of my favorite books, I Am Not Myself These Days) and his partner, Brent Ridge, also known as The Beekman Boys (for their upstate New York farm, Beekman 1802), would be competing, I considered tuning in. Although the desire to read and decompress on Sunday evenings won out over watching television, I was so excited to learn that the duo won the race this past Sunday.

According to their blog, Beekman 1802, the team received over 8000 wishes of congratulations after their win was broadcast. But none touched them as much as a letter they received from the mother of a 12-year-old son named Colin:

"I’m sure you guys are way too busy to read this, but I want you to know how inspirational you two are to my 12 year old son. He is gay and is dealing with bullying and harassment in middle school. It’s so hard to see him going through this, and sometimes the 'It Gets Better" message is lost on a 12 year old who feels that middle school will never end...We cheered you on every Sunday night and agonized every time you had difficulties. My son was so incredibly thrilled when you two won last night (as was I!). Thank you for helping him see that not only DOES it get better, it gets AMAZING."

To help encourage Colin to understand it does get better, and he is an amazing person, the boys shared Colin's mother's note with the rest of the teams from this season of the show. Each team, or at least a representative of each, took a photo of themselves holding an encouraging message for Colin. (Below are Josh and Brent's pictures.) 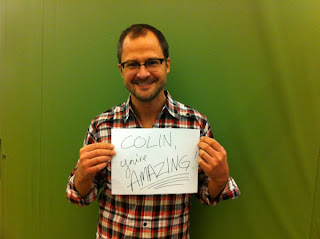 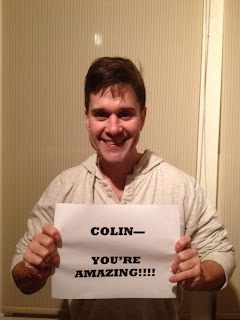 Reality shows are notorious for people just looking to launch their careers or simply get famous for doing nothing, like many of those our culture seems to prize as celebrities. To me, it's so awesome to see people use whatever notoriety they've gained to make a difference, even a small one, in the life of a boy struggling with loving the person he is when others tell him not to.

You can see pictures of the rest of this season's teams here.

Thank you, Josh and Brent, for being awesome role models and remembering what it's like to struggle with who you are.
Posted by Larry at 4:22 AM