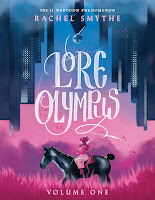 Who knew the lives of gods were so dramatic? Lore Olympus gives you all the scoop!

So many of my Bookstagram friends seem to enjoy books with mythological themes. And when they ask, “What's your favorite mythological figure,” I usually answer with, “Mythology isn’t my jam,” due to some unfortunate scarring in high school. (Surprise quiz after returning from a sick day=being labeled "brain dead" by your English teacher. Even with a doctor's note.) But if mythology was more like this amazing graphic novel? I’d be all over it and then some!

So, in Rachel Smythe's retelling, Persephone is new in Olympus after finally being able to escape her overprotective mother, Demeter. One night, Persephone and her roommate Artemis go to a party, where she meets Hades. The two feel an instant connection to one another, which sets off a cavalcade of jealousy, revenge, and repercussions among the gods.

This is tremendously creative, beautifully drawn, and it’s not your everyday graphic novel. There’s adult language, some things which could be triggers (e.g., rape, drugs), and drama galore, and I couldn’t get enough. The only thing that would have made this better for me was if I knew mythology so I understood the issues the gods had with, and their relationships to, one another. (I often joke that if I ever was a contestant on Jeopardy, mythology would be all of the clues!